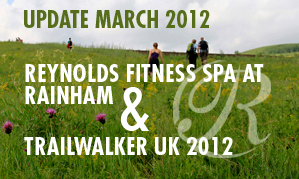 We started our day at Reynolds Fitness Spa in Rainham. We all met and organised lifts for the day. From there we drove off to Bekesbourne train station for our starting/finishing point. Chris had a BCD booklet (basic casualty drills) and said to Mark that he had something in his pocket to show him. As usual Mark had the wrong idea…

We left the station and headed for Bekesbourne Hill. We went round the station then realised we could have taken the bridge which would have been easier. From there we carried on towards Littlebourne via the orchard and woods, where we were challenged by a collie in one of the alleys. Once through the woods we followed the street down to the post office where Gemma stopped to buy a PASTY! And caught red handed!

After a map consultation we picked up from where we left off and went towards the North Downs, crossed over a small foot bridge where yet again we were sniffed out by two dogs. We carried on up the hills, passed a farm and country estates, on to the fields. With Chris and Mark leading the way we gave the maps to Velvin O’Hara, a member of the team and a member at Reynolds Fitness Spa Rainham, to navigate us through the fields and village to the North Downs trail. Velvin’s Navigation was remarkable. As we followed the trail we gave way for a couple of horse riders, where one of the horses starting to go scatty at the sight of Chris’s Bergen! Karina (another member of the team and a member at Reynolds Fitness Spa Rainham) said it was because the Bergen looked lighter than the rider. Velvin had found her dream house along this route and Mark almost took the wrong turning (Due to distraction from the girls talking).

As we took the cross country route we found ourselves heading towards Patrixbourne where Steve Blouet (another team member and gym member) was dying for a pint. The first pub we came across, The Mermaid Inn, was closed, so we carried on another 1.5 kilometres to the next pub, The Black Robin. We stopped outside for lunch then went in for a drink. At this point Steve was happy. Chris was denied entry as his webbing would not fit through the door so he had to remove it before he was allowed in. Behind the bar was a black dog, who jumped up to the bar to see what was going on and for a fuss.

Break over, we collected our kit and carried on for our last section of the TAB/Hike. We followed the A2 towards the North Downs with obstacles in our way (oncoming traffic). When we reached the North Downs trail it was one easy stretch, or so Gemma thought. Instead of following the path to the left she took the gate to the right and took the wrong route and ended taking us to a housing estate. That took us through a field of sheep which started coming towards us (we gathered they were going after Velvin as she was wearing a woolly cardigan and thought that she was wearing their cousin!). After some consultation, we gathered our bearings and headed back. A gentleman gave us some advice on what route to take and what to see. He was talking about an old church, and when he saw that Chris was in uniform and is a Royal Engineer in the TA, he wanted to blow it up… So we waited for the gent to leave and took our own route. 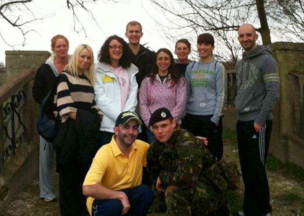 We reached the station and planned our next meet; hopefully a night walk!
18miles took us 6 hours.

by Sapper Chris Firman (RE TA)