Members of the Month – Mick Cox and Janet Pyne 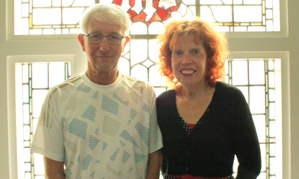 Our June ‘Members of the Month’ go to our dedicated duo Mick Cox and Janet Pyne.

Mick and Janet joined Reynolds Fitness Spa within the first two weeks of opening our Bexley site in 2003 and are still dedicated members.

Both are very competitive with each other and compete in 20 races a year around the world including Amsterdam, Munich, Holland, France and Portugal. They train a total of six days a week with a mixture of cardio, resistance and core workouts spread throughout and always make sure to include stretching. When I spoke to Mick about his time at Reynolds he said:

‘’Reynolds holds up to the best of the best in all the gyms I have been to, the instructors are very approachable and caring for their members, which can be hard to find nowadays. All of them are passionate at upholding high standards of cleanliness and maintenance at the gym, which makes our training a lot easier.’’

Between them Mick and Janet have completed an outstanding 12 Great North Runs, 12 Great South Runs and 11 Marathons! If that isn’t enough to be proud of, Janet had an amazing review with Dan Jones in which she lost 2.7 kgs in overall weight and a whole inch off her waist. She has this to say about Reynolds:

‘’I do enjoy my time at Reynolds, I can get beauty treatments each month with Ashleigh AND still keep track of my training progress with Dan, Reynolds offers something for my every need, and I love it!’’

The sky is the limit for Mick and Janet’s future. Mick wishes to complete the London Marathon in less than four hours and reach number one in his age group for the Great South Run. Janet has slightly different future goals in which she would like to maintain her current fitness and receive a good age time for the London Marathon.

‘’Improvements can be made no matter your age – it is after all just a number.”

We couldn’t agree more and we wish Mick and Janet the best of luck racing in Barcelona this year.