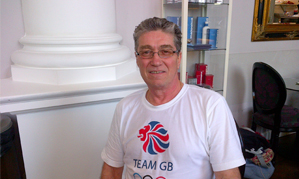 This month’s Member of the Month, goes to the inspirational Colin Milne.

Colin joined Reynolds Fitness Spa back in 2009, shortly after cancelling his membership with another gym. He had decided to look for something different and it has been nearly four years now since he joined Reynolds. He loves coming here as he enjoys meeting the other members, staff and the facilities are up to his standards.

Colin has always been a sportsman and loved playing football, cricket, golf and many other competitive sports. Unfortunately Colin contracted MRSA in 2001, which resulted in his right leg being amputated in 2003. He stopped training for two years, put on weight and his general outlook was gloomy. He feared that people, especially his wife and grand-daughter, would not accept him for the way he was.

Colin didn’t give up, he got back all his motivation and started training again. He attends the gym three to five times a week and makes a record of his daily progress. It has now been 10 years since his operation, he has lost about 15 kilos and regained his confidence. Most importantly, he has got his life back.

We asked Colin about his experience, and he said:

“I feel great coming to this club, I meet lots of nice people. I couldn’t do it without the staff! I aim to keep active and to maintain good fitness levels, and most of all, to enjoy life!”