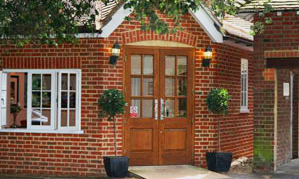 John joined The Old Parsonage in June 2010 after suffering a horrific accident in October 2009 which broke his left leg in 7 places and was told he may not walk again.

After extensive surgery John’s leg is now held together with a metal rod and 5 screws.

John’s programme consists of 30 min cardio, weights, stomach and stretches. Although some exercises can be uncomfortable for John he does not give up. This just shows that determination and persistence pays off.

I would like to say thank you to John for working so hard with the programme I set him, and look forward to seeing how well he has done in another few weeks, when he has had his 12 week personal training review.

Back in September 2009 I had an accident that left me with a crushed leg. Fortunately, surgeons were able to save it. Needless to say I spent many months not excising and probably eating more than I usually would, so when I joined the gym in June of the year, I was so big they were considering giving me my own postal code!

Being a small gym I have found everyone to be friendly. It’s so much better to walk into a nice atmosphere where members and staff say hello instead of a sea of treadmills and anonymous people that ignore each other.

Sometimes it is easier not to go to the gym. Hard work pays off in the long term but unfortunately laziness pays straight away! I think it’s great that the staff offer regular assessments of fitness levels as it helps with motivation and seeing the results is very rewarding. I always feel much better after a workout no matter what frame of mind I was in before, and these ‘snapshots’ really do help.

As for my results so far – I feel much better generally, I have more energy and I am no longer offended when I get in a lift that says ‘Maximum 8 persons only’.